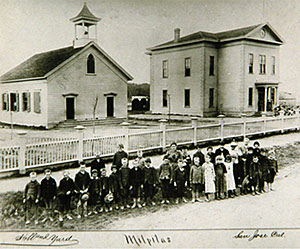 The Early History.
﻿The Milpitas Grammar School on Main Street (now part of the City of Milpitas Library) served the educational needs of the majority of citizens of Milpitas from about 1912 to 1956.  Prior to 1912, Milpitas children received their education from three different schoolhouses – Air Point School, The Calaveras School, and a schoolhouse built and shared by the Presbyterian Church.

The Modern Era.
Milpitas Unified is a growing early childhood through adult education award-winning school district with high academic standards and an innovative learning environment. The student population of more than 10,200 is rich in ethnic and cultural diversity, with more than 50 different languages and dialects spoken.

It has an annual budget of approximately $126 million in the general fund and $145 million districtwide, and nearly 941 employees.

Milpitas Unified School District is a high performing school district. The new California School Dashboard provides parents and educators with meaningful information on school and district progress so we can participate in decisions to improve student learning.  Based on a color system, with blue being the highest and going down from yellow to orange to red, Milpitas Unified is in the blue zone for its graduation rate and English language arts scores, not falling far behind, in green, with college/career and mathematics. There are orange and red areas in chronic absenteeism and suspensions. To take a deeper diver of the data, visit the website here.